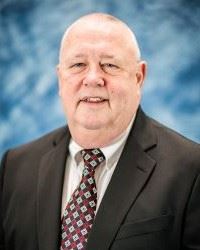 James Olson became a member of the Board on September 30, 2019, when Mayor Sam Teresi appointed him to till the unexpired term of Tyler Case who resigned, and City Council formally approved the appointment.  His term extends through December 31, 2021.

Mr. Olson holds a Masters of Business Administration from St. Bonaventure University and a Masters of Taxation from Nova Southeastern University.  He is an Enrolled Agent representing taxpayers before the Internal Revenue Service.  He also graduated from Harvard University John F. Kennedy School of Government Senior Executives in State and Local Governments Program.  He currently is employed as an Enrolled Agent for Vanstrom and Company, CPA in Jamestown.

A longtime Jamestown resident, Mr. Olson serves on the board of the Jamestown Area Soap Box Derby and as a member of St. James Roman Catholic Church.  Married to his wife Pam, the couple are the parents of three adult children and grandparents to three grandchildren.

Mr. Olson, recently retired from his position as City Director of Administrative Services - City Clerk/Treasurer which he returned to in May, 2019, through January, 2020, after first retiring in August, 2017. Olson began his City of Jamestown career in 1981 as the Executive Assistant to the Mayor.  He became City Clerk in 1985 and City Clerk/Treasurer in 1992.  After leaving the position in 1994, Mr. Olson worked independently as a consultant to local governments and from 1996-1999, served as Finance Officer for the City of Warren, Pennsylvania.  He returned to Jamestown as Director of Financial Services/Treasurer in 2000. In 2006, he added City Clerk to his Director of Financial Services responsibilities, retiring in 2017, when he became an Enrolled Agent with Young Tax Service.

A longtime Jamestown resident, Olson serves on the Jamestown Area Soap Box Derby Board and as a member of St. James Roman Catholic Church.  He is married to his wife Pam.  The couple are the parents of three adult children and the grandparents of three grandchildren.