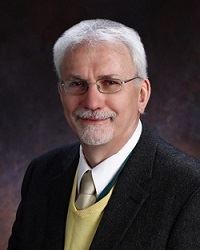 Gregory P. Rabb. Chair of the Board, was first appointed to the Jamestown Board of Public Utilities Board of Directors by Jamestown City Mayor Sam Teresi, effective January 1, 2008, as a City Council representative. He was reappointed as a citizen representative by Mayor Teresi effective January 1, 2018. On January 22, 2018, he was unanimously elected as Chair of the Board and was unanimously re-elected to that position on February 20, 2020. In addition, as of January 8, 2018, he serves as Chair of the Jamestown City Planning Commission.

A former Assistant Dean of the Division of Business and Social Sciences for the Jamestown and Cattaraugus County campuses of Jamestown Community College (JCC), Rabb is a professor of government, politics and economics,  In addition, he serves as Coordinator of Global Education at the College. In May, 2011, Rabb was honored with the State University of New York (SUNY) Chancellor’s Award for Excellence in Teaching.  In 1987, the professor received the JCC Faculty Award for Excellence.

Rabb is currently a Richard P. Nathan Public Policy Fellow, Rockefeller Institute, SUNY.  He is a former Executive Director of the New York State Municipal Clerks Institute. In Spring, 2017, he was awarded a grant to study in Palestine through the Palestine American Research Center.  He also currently serves as Adjunct Professor of Political Science at Buffalo State College.